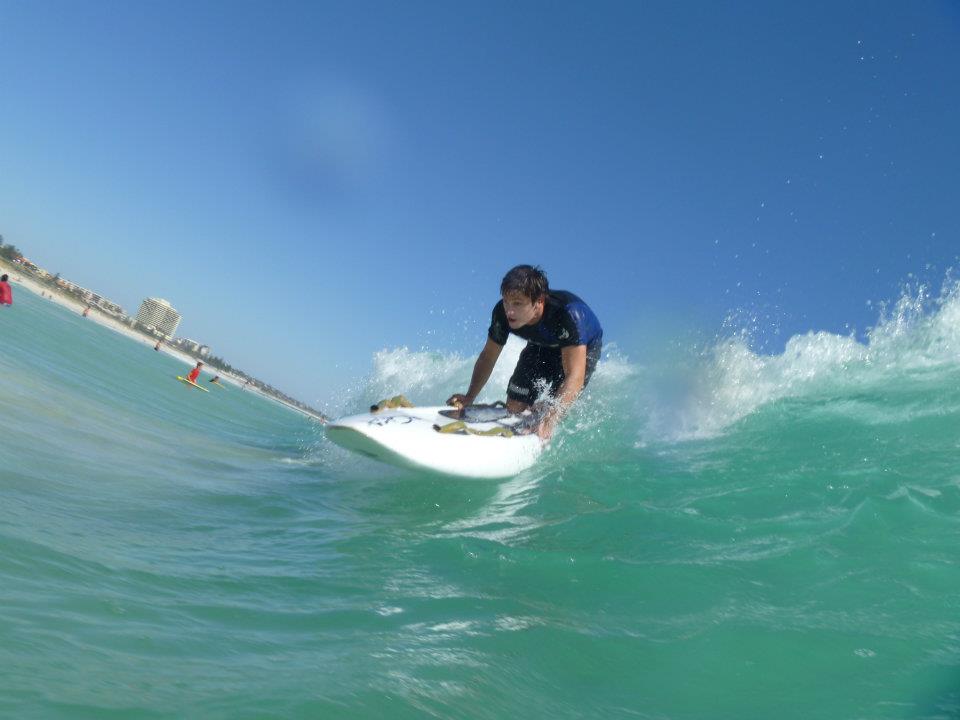 There is a tremendous amount of misinformation, guesstimating and wild wishful thinking involved in wave heights. I thought this article which I have adapted from one the Bureau of Meteorology in Australia put out would be useful. Anyone who visits / uses the beach / ocean needs to understand this concept and the related terminology in use around wave / swell predictions.

A lack of understanding costs the lives of many rock fishermen and boaties every year. It is also the cause of many rescues of swimmers from flash rips. When these large waves hit the beach the massive volume of water has to find its way back out to sea and can / does very easily drag unwary swimmers with it.

Predicting the size of the wind-generated waves that roll in from the sea around Australia is not as hard as you might think—especially if you understand the concept of ‘significant wave height’.

While down at the beach or out on the water you will experience a wide range of wave heights during your activity, and occasionally a genuine ‘big one’, the fabled “rogue”, “bomb” or “wave of the day”. However wonderful a prospect they are to surfers, big waves can pose a serious danger to boaters and fishermen—particularly when they arrive at reefs, bar crossings and deep-water coastlines, where the first indication of a wave’s true size can be as it breaks on the rocks where you’re standing. These are the rock fisher killers and the reason rock fishing is Australia’s most dangerous sport. They are also the cause of many boat capsizes and sinkings due to the simple face that the anchor chain / rope was not long enough to accommodate the big one.

The size and behavior of waves are determined by a range of factors, from the direction of the swell to the speed of the tide, prevailing ocean currents, the depth of the water, the shape of the seafloor, the presence of reefs and sandbanks, even the temperature of the ocean. Ever wondered why on a very large beach all the surfers are crowded into the one or two spots? Well know you know, they have located “The Bank” and are using it to get a good ride. The surfers will also show you where the rips are. They use them as an ocean elevator to get a free ride back out the back for their next ride…

However, there is one factor that rules the size of the waves more than any other—the wind. Waves are caused by wind blowing over the surface of the ocean and transferring energy from the atmosphere to the water. The height of waves is determined by the speed of the wind, how long it blows, and crucially the ‘fetch’—the distance that the wind blows in a single direction over the water.

Naturally, bigger waves result from conditions that cause strong winds to blow for a sustained period over a large expanse of ocean. The resulting waves can travel for hundreds or even thousands of kilometers, smaller waves being absorbed by larger ones, faster waves overtaking slower—gradually growing and arranging themselves into the regular ‘sets’ so familiar to lifeguards, surfers and paddle-boarders. Understanding this along with wave periods, assists the lifeguard to pick the best time and location to head out for a rescue.

The result of these interactions is that it is normal to experience a wide range of wave heights when on the water.

Utilising the standard international convention, the Bureau uses the concept of ‘significant wave height’ to notify ocean-goers of the size of swell and wind waves (or ‘sea waves’) in its coastal forecasts. Significant wave height is defined as the average wave height, from trough to crest, of the highest one-third of the waves.

Devised by oceanographer Walter Munk during World War II, the significant wave height provides an estimation of wave heights recorded by a trained observer from a fixed point at sea. As the following graph shows, a sailor or surfer will experience a typical ‘wave spectrum’ during their activity, containing a low number of small waves (at the bottom) and a low number of very large waves (at the top). The greatest number of waves is indicated by the widest area of the spectrum curve.

The highest one-third of waves is highlighted in dark blue in the graph below, and the average height of waves in this group is the significant wave height:

This statistical concept can be used to estimate several parameters of the waves in a specific forecast. The highest ten per cent of the waves are roughly equal to 1.3 times the significant wave height, and the likely maximum wave height will be roughly double the significant height. So, if you are going rock fishing or anchoring your boat near a reef etc, remember it is not good enough to simply look at one or two waves and she will right mate…..it won’t be, allow for the bombs or pay the ultimate sacrifice. No matter how good and how fast the lifeguards are, sometimes we will not be able to save you.

Much like the median house price guide in the real estate sector, the significant wave height is intended as an indicative guide that can help you gauge the range of wave sizes in a specific area. While sailors can use the figure to evaluate the safety of an open-water voyage, surfers may use it to rate the likelihood of at least one ‘big one’ arriving while they’re out in the surf. Rock fishers should also be aware of the dangers of the ‘big one’ washing them off the rocks.

Wave height information for seas and swells is included in the Bureau’s Coastal Waters and Local Waters forecasts, covering the Australian coastline and capital city waterways. These forecasts are also transmitted by marine radio (HF and VHF).

Maps and tables of swell and wind wave heights are also available on MetEye—the Bureau’s interactive weather-mapping tool—which allows mariners to ‘play the weather forwards’ over a specific stretch of water for the coming week.

More information on MetEye’s wind and wave features can be found in these recent articles:

About marine weather services: Information on the Bureau’s marine forecasts and terminology.

Important note: Please be aware that wind gusts can be 40 percent stronger than the averages given in coastal forecasts, while maximum waves may be up to twice the significant wave height.