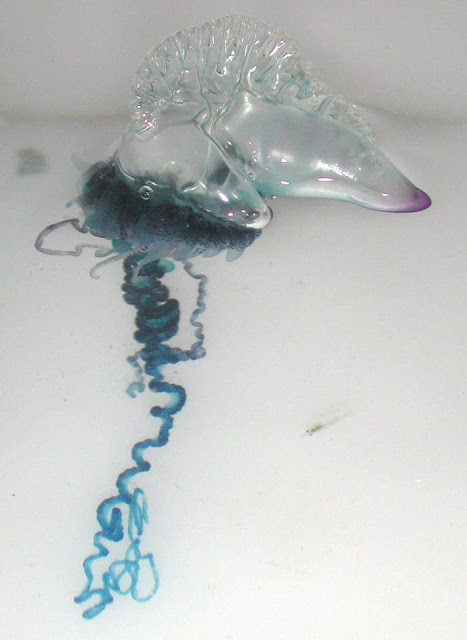 BLUE-BOTTLES:
The Portuguese man o’ war (Blue Bottle) is composed of three types of medusoids (gonophores, siphosomal nectophores, and vestigial siphosomal nectophores) and four types of polypoids (free gastrozooids, gastrozooids with tentacles, gonozooids, and gonopalpons), grouped into cormidia beneath the pneumatophore, a sail shaped structure filled with gas.The pneumatophore should probably not be considered a polyp, as it develops from the planula, unlike the other polyps. This sail is bilaterally symmetrical, with the tentacles at one end. It is translucent, and is tinged blue, purple, pink, or mauve. It may be 9 to 30 cm (3.5 to 11.8 in) long and may extend as much as 15 cm (5.9 in) above the water. The sail is equipped with a siphon. In the event of a surface attack, the sail can be deflated, allowing the organism to briefly submerge.

The other three polyp types are known as dactylozooid (defense), gonozooid (reproduction), and gastrozooid (feeding). These polyps are clustered. The dactylzooids make up the tentacles that are typically 10 m (33 ft) in length, but can reach over 30 m (98 ft). The long tentacles “fish” continuously through the water, and each tentacle bears stinging, venom-filled nematocysts (coiled, thread-like structures), which sting and kill adult or larval squids and fishes. Large groups of Portuguese man o’ war, sometimes over 1,000 individuals, may deplete fisheries. Contractile cells in each tentacle drag the prey into range of the digestive polyps, the gastrozooids, which surround and digest the food by secreting enzymes that break down proteins, carbohydrates, and fats, while the gonozooids are responsible for reproduction.